The parishioners of Jaiteiro can use fingerprinting to measure the time they spend and achieve points that can be changed by gifts. Miguel Ángel Sobrino shows the system with which his clients can "sign" with his fingerprint and accumulate time redeemable for gifts.

The clients of a bar that already has the party in its name, O Jaiteiro, in Betanzos (A Coruña), have accommodated themselves to the time register in their own way, driven by the owner, as they can sign with their mark finger in a machine that measures the time they spend inside and get points that later translate into gifts such as a drink or clothing.

It is the novel initiative of the owner of this business, Miguel Ángel Sobrino, who, in an interview with Efe, has said that such a proposal came up to somehow "loyalty" to his "usual customers", but now he realizes that "he is having a stir" and it suits him because, at the same time, "he advertises the place" and can always attract new users. In addition, the establishment spent "a big bump" a while ago and was even about to throw the curtain, so now its architect was clearer than ever, if possible, that "renewed" to try his luck.

So, this idea occurred to the aforementioned entrepreneur one day in which, just just opened the bar, at seven in the morning, he saw a news on television about the new obligation for employees to sign in companies, So he began to wonder "what would it cost for a company to upgrade and put a machine with fingerprint". Then, he consulted the prices and saw that it was "something economic", that he did not need much investment - he confesses that it cost him about 30 euros - and, since he is autonomous and has no employees, it occurred to him to put it to measure the time they spend the regulars in their cafeteria and "revitalize" their business. 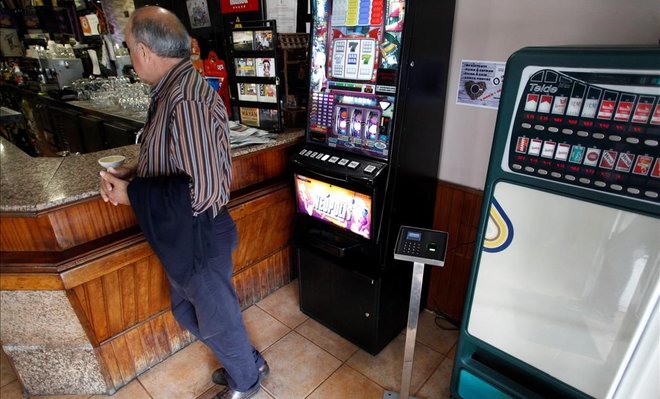 The point where you can 'sign', at the entrance of the O Jaiteiro de Betanzos bar. / EFE

The operation is very simple, since, when someone arrives, it is registered with the name or nickname that you want and then you just have to run your finger through the sensor when entering and leaving and, in case the method fails, each person has a "pin" that you can enter manually. To get gifts you only have to spend time at the bar because "every hour is ten points" and for every hundred the gift is a drink, while at 300 and luckily it has the shape of a shirt.

This system has been in operation for just two weeks and has already registered "almost 70 clients", so Sobrino admits that he is thinking of new awards that he will gradually put in. The majority of those who sign up for this novelty are young, the owner says, and "older people ignore him, he comes to take something as usual" because "they are not accustomed to putting their finger in a machine that gives them read the footprint ".

There are no legal obstacles

On a legal level, he explains, there is no problem because people do not have to give "any information", nor the DNI, not even their last names: they only have to put a nickname or the name they want and it is associated with their fingerprint, so that it is "a friendly record" between the client and the owner of the bar. A faithful of this bar, Estrella Núñez, said Monday that she already has about "700" points, but does not want to spend them until she accumulates more and can get a great gift, such as "a trip for example," he jokes that he sees as his particular Santa Claus.